CPSA has scored a couple important victories recently relative to California’s ongoing development of additional water use restrictions as a reaction to the state’s historic five year drought. The association was successful in convincing the City of Lathrop to remove a ban on filling new and existing swimming pools and spas at Stage III in their Emergency Water Shortage Contingency Plan. In addition, as a result of a meeting with the top water conservation staff at the Department of Water Resources, CPSA was successful in confirming a interpretation of the Model Water Efficient Landscape Ordinance (MWELO) that is advantageous for the industry and has the potential to ensure that most swimming pool and spa projects will Not be adversely affected by application of the these regulations.

Unfortunately, the industry is far from being out of the woods with regard to adverse water use restrictions as MWELO can and is being modified at the local city level. These local ordinances, which are allowed to be stricter that the state regulation, have the potential to make it much more difficult and/or expensive to build a pool in California.  This is a different issue than the water use restrictions CPSA has been responding to over the last few years. Until now we have not seen a serious example of a change by a local city ordinance that would have this affect.  However, our worst fears were confirmed just last week by the City of Santa Monica.

The CPSA has been participating in a series of Landscape Stakeholder Advisory Group meetings with the California Department of Water Resources, the only pool association to do so. At the most recent meeting a presentation was given by the City of Santa Monica regarding their water neutrality effort. The goal of water neutrality is that the city can function entirely on its own water supply which it aims to do by 2020. One of the main methods of achieving this is by strictly implementing MWELO guidelines, one of the effects of which is to change the threshold for the size of a pool and spa project so that virtually all pools would come under the new ordinance.

In the original text of MWELO, the Ordinance is only applied to projects that are 500 square feet of new construction or 2,500 feet of rehabilitation, meaning that the vast majority of pools and spas will be exempted because, according to our recent interpretation from DWR, you only measure the square feet of the water surface in the pool.  However the City of Santa Monica has redefined “new development”, stating that all new or enlarged pools and spas are subject to review. In order to receive a permit to build any pool or spa, the builder or owner must first complete a form calculating their “offset gallons per year,” or how many gallons of “new” water the city believes they will be using. That number must then be offset either by paying the city to install new toilets elsewhere or agreeing to retrofit your property – including paying for the permits, fees to do so.

Where this becomes truly dangerous for the pool and spa industry is that the calculator that must be used does not reflect the reality of pool water usage and installation. Nowhere does it allow for the amount of irrigated land that the pool is replacing to be taken into account, nor the irrigated land that will be replaced by hardscape. Instead all of the water in the pool is considered “new,” meaning that the homeowner must offset a truly staggering amount even if, in fact, they end up using less water than they did before!

For example, to build a pool with 480 square feet of water and 769 square feet of hardscape, according to the calculator the homeowner must offset 27,522 gallons of water out of their own pocket. However the 1,249 square feet of turf grass they removed used 29,180 gallons of water every single year compared to the 8,971 the covered pool will after it is filled. Not only is the homeowner not using any “new” water, they have drastically reduced their water consumption moving forward, and yet they still must pay for 13 toilets to be installed – a cost of up to $8,213.

In one fell swoop, the City of Santa Monica has added significant additional cost that will act as a disincentive for a homeowner to build a new pool or remodel and expand an existing pool. In addition, this application of MWELO undermines the recent interpretation confirmed by CPSA that most pool and spa projects fall under the 2,500 sq. ft. threshold.

CPSA is already working to contact the city and explain our views relative to this misguided application of MWELO. However, the great danger in the development of this program is that it is actively being shared and prompted as a model for other cities to duplicate. 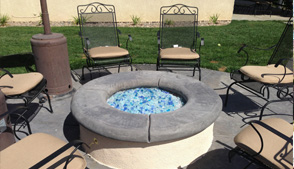 How to Plan the Perfect Backyard

Working with JC was an excellent experience! He conducted himself in a professional manner throughout the entire project. Every phase of the construction was on ...
Pool is done and looks amazing! Thank you so much JC!
Always on time... And walked us through the remodel of our pool step by step. We had a couple of issues with the remodel that ...
Excellent! The contractor was true to his word and everything happened as he said it would. 5 stars !!!

JC was absolutely amazing! He had very competitive prices, we had 3 quotes and he was by far the cheapest, and that doesn't mean that ...

When I told people that I was putting in a pool, they told me all kinds of horror stories, so I prepared myself for the ...

From the moment we met JC we were confident that he was a person we could trust. We explained our vision and within an hour ...
Excellent work. On time. We were impressed by the owner who was present during the remodel. Would recommend them highly.
Aloha, J and his team were truly professional. He was on site daily during the entire remodel. He made sure all our questions were answered ...
Very knowledgeable and service oriented professional. Tremendous attention to detail, great customer service and high quality work. I've referred this company to my father.
prev next